Kibor Bot Autoclicker » Kibor - Integrated development environment for bots » About Kibor » Version 2.11 Service for demonstrating the work of scripts without code transfer and with a time limit.
Страниц (1): [1]

1. Kibor - 24 Июля, 2018 - 10:44:26 - перейти к сообщению
A service for demonstrating the work of scripts without the transfer of source code with the restriction of work on time is realized - demo mode.

Capabilities:
Downloading scripts to a remote server with access to them by their name directly from the program Kibor.
However, the script code itself remains hidden from the user.
It is possible to set the duration of work in days, scripts on the user's machine from the moment of the first run on their computers. At the end of the test period, the script will no longer run on this machine.
It is possible to generate an executable EXE file that can be distributed without the Kibor program. When you run this EXE into its memory, the corresponding script is downloaded from the server, information about it is given, which the developer gave. In the same way infa is displayed about the end and the term of the demo version. If the demo time for this machine has not yet ended - you can run the script for execution. Read more about generating such an EXE.

The owner of the script can update it or delete it. When upgrading, you can choose if you want to reset or do not reset the demo mode time to users' computers.

To see the demonstration of the service, go to the menu> Scripts on the server - download the script from the server and enter the name "test". The initial time of the test mode is 2 days.

Download, update and delete the script through this window:

You can manage the script only from the computer from which it was downloaded. For the script owner, the demo mode time is unlimited and no windows are displayed if specified when downloading the demo version with the proposal to enter captcha.

Loading of scripts occurs by means of such window:

Just enter the name of the script.

When downloading, you can find out information about the remaining time of work and read the description: 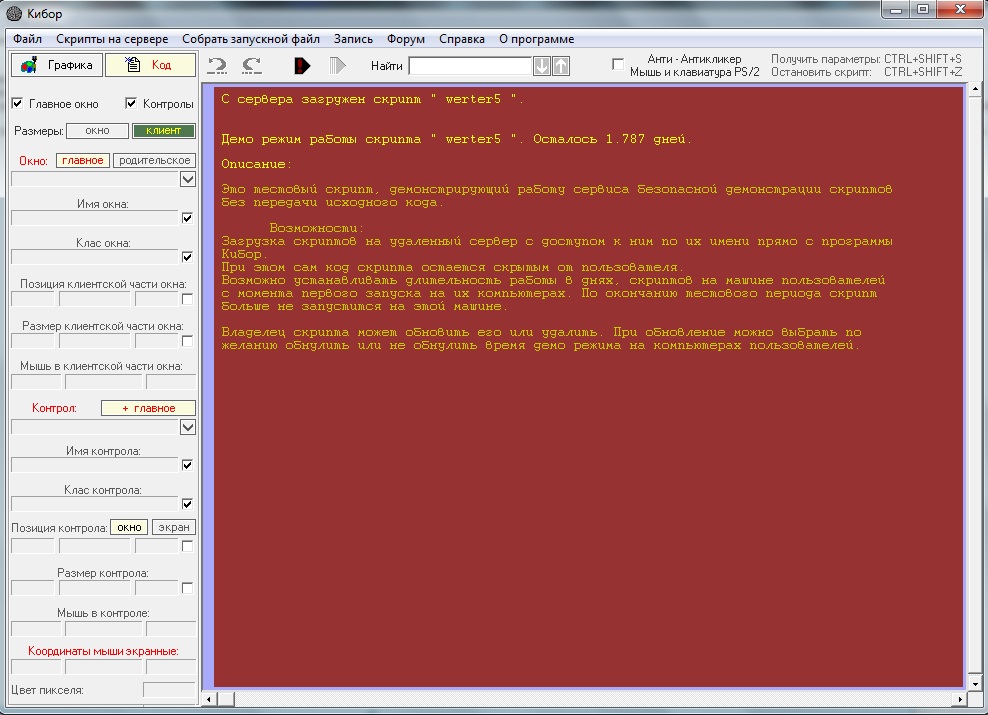 The script owner sees the inscription "Script management is available" instead of the remaining time.

At the end of the time, the script starts to be blocked: 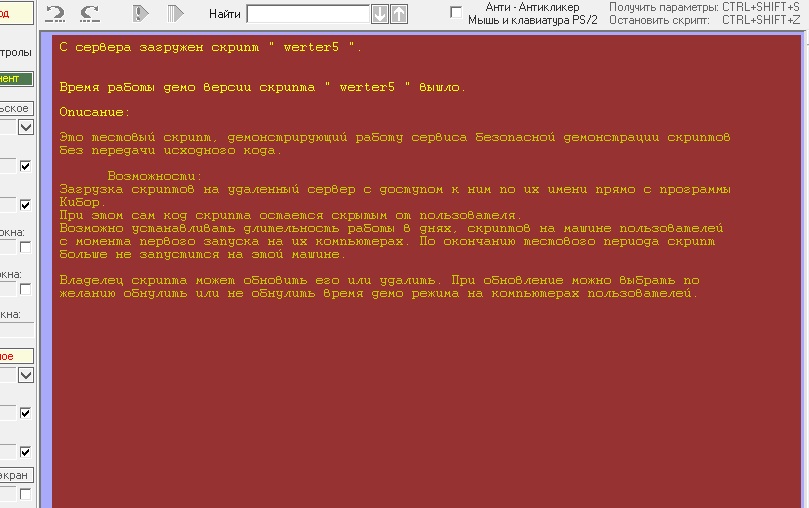 Service is provided as is and I do not give guarantee in the continuity and safety of scripts.